Dragon Con is fast and furious and if you don’t plan your time wisely it will be over before you know it. I spent quite a lot of time visiting the artist’s booths both in the art hall and along comic row. I had the chance to meet some great artists, most of which took at least a little time to review my portfolio.

It was great to meet Jeff Preston, a wonderful illustrator who does his color works in marker! Very impressive stuff! I found out he also lives near Nashville, TN like me. He advised me to be versatile – to be a successful illustrator, you need to be able to do anything.

I briefly got to speak with Joe Jusko, his booth was always busy! He took a quick look through my portfolio and commented that he thought that the pen and ink work over my painting conflicted. He said I should either do full color renderings in paint or work in an art style more conducive to inks.

Mark Poole, an artist who has worked for TSR, Magic: The Gathering, and numerous comic covers had a booth in the artist’s hall. He looked through my stuff and told me it was good. Seeing the obvious fantasy theme in my art, he suggested that I go to Gen Con, which is the biggest roleplaying convention in the U.S. At Gen Con lots of art directors from various game companies that take time to review artist’s portfolios. There are smaller companies are there, too, which Mark suggested was a good place to get my start.

I decided to compete in the Quick Sketch Competition, which was judged by Stephanie Gladden. My little sketch of an Ape-man called “The Native” was a runner up for character sketch. After the competition I went up to show Stephanie my portfolio. After looking it over she recommended that I draw what you love. She found her way by drawing cartoons, because she loves cartoons. She also suggested that if I worked for an animation studio it would give me a lot of practice drawing and that when I was done working at a studio, I would be quite skilled at drawing. She said that’s what worked for her.

One of the highlights of the weekend was getting to see the amazing Basil Gogos. I watched a panel he was speaking on where he talked about his process of making art. One thing that really clicked for me was that he worked from black and white photos to allow freedom in choosing colors in his paintings, and used them to show tonal qualities. You can really see the richness of color in his final paintings!

At this point I was starting to see a pattern in what other artist’s saw in my work. Most said that I had a great understanding of color, but that I needed to focus more on my values, and that I needed to draw more of what I love. I was beginning to realize that speed was not a path to greatness. Art should be a labor of love! 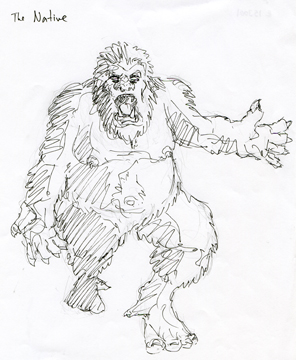 My Quick Sketch of the Native