All day Saturday my wife Loraine, my friend Matt Essary, and I sat behind my little art table, talking with all the wonderful geeks and sci-fi / fantasy / horror enthusiasts of Hypericon. Next to me sat Paul Bielaczyc who together with his brother Mike own and operate their own company called Aradani Studios. When I asked Paul what his company was all about the first thing he told me is that they sold elf ears and that they did it full time.

I was floored! I love hearing about people who are able to turn their passions into a carrier. Now in fairness Paul is an amazing artist, and his company has a lot of cool costuming and geek merchandise, but for the remainder of the weekend I introduced Paul as “the elf ear salesmen.” If you’re into anything nerdy take the time to look around the Aradani website. I think you’ll be glad you did.

Throughout the weekend I picked Paul’s brain about the various conventions that he’d done and got a lot of great advice. The other great thing about being next to Paul’s booth was that lots of people came by to visit him. Many of those people were also veterans of the convention scene and would offer me even more valuable advice. I quickly found my notebook full of a list of conventions and websites I should look into to. 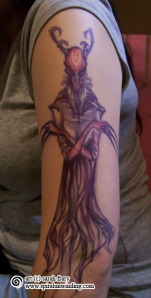 An example of Sarah's Sharpie work

Across the way was Sarah Frary who spent the weekend doing the most amazing Sharpie tattoos I’ve ever scene. Now in truth I’ve never scene a Sharpie tattoo before, but these things were freekin’ sweet! Trust me. I spent a lot of my downtime staring across the way at Sarah’s art, and I fell in love with it. Sarah has an amazing understanding of line and does most of her stuff in pen directly on paper without much prior sketching. (Check out Sarah’s blog for more sharpie tattoos!)

What I love most about Sarah’s work is the strong sense of style all of her work has. Of course I’m a fan of warped monster creatures, and she has lots of those, but she also has a lot of cool tree women that the ladies of the convention were big into! Person after person swarmed her booth demanding sharpie tattoos. My favorite was a pregnant lady who got a baby cuthulu on her belly!

What I found so inspiring about Sarah was that she drew the things she wanted, the way she wanted to draw them. Nothing about her art was forced, and it at felt so free. Staring at her stuff for the whole weekend really inspired me to draw more of the twisted things that pour through my brain.

My hope is that I can hold onto the high of this weekend and channel the energy all the other artists had into an ongoing motivation to draw, and to let me be me.