At Dragon Con this year I stopped back by the booth of Jeff Preston. For those of you who’ve been reading my blog for the last year, you might remember that Jeff Preston reviewed my fledgling portfolio at Dragon Con last year. If you’re curious here’s the link to that post from October 15th 2008.

What continues to amaze me about Jeff’s work is that not only is it awesome, but it’s even more awesome when you discover that he works in markers! That’s right markers! Take a moment and check out Jeff’s MySpace and you’ll see some really cool samples of his art.

So a funny thing happened at my local art store, Jerry’s Artorama. When I was walking about looking at all the fun art supplies I come across the type of markers that I saw Jeff using, and they were marked at only $20 for 12 markers! There were several different sets but I settled on Prismacolor Marker Set 12 Warm Gray. I think ran home to give them a try, and I loved them!

The first thing I drew was a simple zombie face. Whenever I’m testing out a new medium I like to stick to what I know and not venture out to far. When I was done I used my 005 pen to pick out some basic details.

I had so much fun with the markers that I brought them to Scare Fest. In between drawing Zombie Portraits we had some downtime early Saturday morning. My buddy Matt Essary looks at me and says, “Hey draw me a monkey with a knife.” I should mention that my friend Matt really enjoys coming up with random stuff and having me draw it. So I broke out the markers and once again rose to the occasion with this creepy little piece. 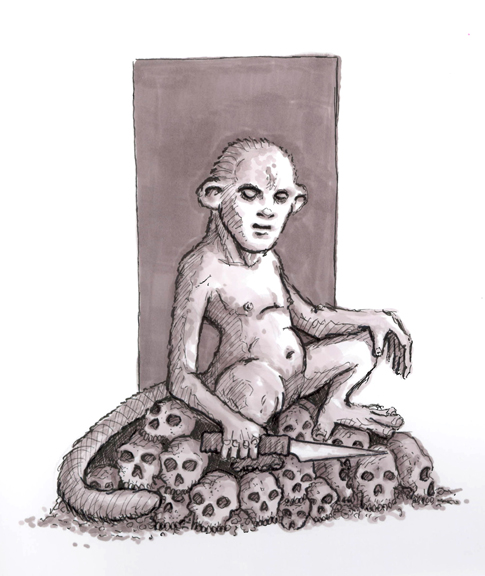 Monkey on Skulls by Sam Flegal

After Scarefest I was dying to draw my new Cat Skull, so once again I got out the markers and set to work.

I have to say I LOVE my new markers! They are a lot of fun, and I love the finished look they give to my sketchy style. My next goal is to do a more finished illustration piece with the markers.